The Blackwater River Foundation believes that historic preservation is the one form of economic development that is simultaneously community development.  We protect the environment by reusing and restoring resources, and choose to live by example.  Since 2003, the Foundation has been striving to preserve historical, cultural and environmental resources. Please read below for details of our notable accomplishments.

Built by Ben and Katie Finkelstein in 1926, this quaint one-story bungalow on Henry Street was in their family until the death of their youngest daughter in 2009 when the Blackwater River Foundation purchased it from the family heirs to save the home from demolition by city code enforcement.  For 84 years, this house was home to two generations of Finkelsteins, a well-known Jewish family in Milton. The house fell into disrepair after Hurricane Ivan in 2004 and a developer wanted the property to build modern duplexes in Milton’s historic district. Since 2010, the Foundation has done emergency repairs to the home including gutting its moldy interior and shoring up its foundation. The house has been vacant for a decade while the Foundation has focused on other urgent preservation needs within the community (see profiles below).

Mr. Ben, a native of Romania, came with his siblings to America in 1907 aboard the Russian ship Smolensk. In 1921, he and his wife Katie, a native of Atlanta, moved to Milton to open Finkelstein’s Surprise Store, a retail store that would serve the Milton community for more 40 years until Mr. Finkelstein’s death in 1964.  Mrs. Finkelstein resided in the house until her death in 1990.  The house was then home to her daughter and son-in-law until her daughter’s death in 2009.  Upon the emptying of the house in 2009, a suitcase containing letters dating from 1939 to 1947 documented Mrs. Finkelstein’s efforts in saving her cousin’s family in Prague during the Holocaust.  Through extraordinary efforts, Mrs. Finkelstein was able to secure the family’s travel to London, a safe haven, where they lived in refugee camps throughout WWII until she arranged for their arrival to America in 1947.

Recognizing beauty where others see nothing unusual, Foundation members and directors secured the funding to purchase the house to preserve and showcase Milton’s unique architectural history. Because of its location adjacent to the West Florida Railroad Museum and T.W. Jones House, the Foundation intends to “re-purpose” the Finkelstein House to serve the public, highlighting the story of the family who called it home for 84 years.

The stately old house that stands prominently on Henry Street as you enter Milton from Bagdad and Interstate 10 was once home to Thomas W. “Tom” Jones and his wife, Alice.  The story of the Jones family is one of public service and of prominent historical significance with the family’s connections to shipbuilding and lumbering industries in and around Milton dating back to the antebellum South.  Mr. and Mrs. Jones lived in the house from the time they were newlyweds in 1897 until their deaths in 1951. 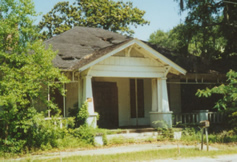 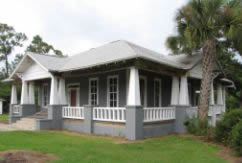 Mr. Jones was a downtown Milton merchant and served as the Clerk of the Court in Santa Rosa County for three terms from 1920 until 1932.  Mr. Jones hosted many social gatherings in the house, including a ceremony honoring the last remaining Civil War veterans in Santa Rosa County.  The Joneses were known throughout the Northwest Florida and South Alabama region for their vast collections of camellias and various flowers.

The architectural significance of the house is one unique from all others in the downtown Milton area and perhaps anywhere. The house is a one-of-a-kind bungalow. Originally built sometime in the late 1870s as a one-and-a-half story Creole Cottage, the house was converted into a one-story Craftsman Bungalow in 1922.  The only evidence of its 1870s existence is found inside the house with its central hall, four-square layout, servant’s wing, distinctive construction technique, and evidence of a staircase in the ceiling joists of the central hallway.

Newspaper articles indicate Mrs. Jones had been hospitalized in Mobile for a serious and lengthy illness in the early 1920s.  Within months of her return home and while she was recovering, Mr. Jones created his wife’s dream house — a Craftsman Bungalow — by altering their existing 19th Century cottage to include “modern” amenities.

Throughout the 1920s and 1930s Mr. Jones built many of the bungalows near his home and throughout downtown Milton as rental properties. “Architectural signatures” link these houses in stylisms unique to Mr. Jones.  Many of these houses still stand today.

After years of abandonment and termite infestation, this historic property was donated to the Blackwater River Foundation in 2003 to be restored and to serve as a public facility.  After many years of work and partnership, the historic T.W. Jones House is now the home of the Panhandle Butterfly House and Nature Center.  The Blackwater River Foundation is proud of its achievement in saving this historic building over a 15-year period and having it finally serve a public purpose for the public to enjoy for generations to come.

Built in 1916 by A.J. Brown, a master carpenter from the Bagdad Land & Lumber Company, this house was originally occupied by the mill’s electrician, Mr. Blumefield, until the Dr. John B. Turner family moved into it in 1918. The house remained in the Turner family until 1979.  Dr. Turner arrived in Bagdad in 1910 to serve as the mill’s physician and would practice medicine until his death in the early 1970s.  Nearly three generations of Bagdad residents were treated by Dr. Turner.  When the Commissary building where his office was located was demolished in the 1960s, Dr. Turner moved his office into a room in his house.

In the next 30 years the house fell into disrepair.  In 2009, half of the house’s ownership was donated to the Foundation.  The Foundation was able to purchase the remainder of the interest in the property in 2010.  The house was sold to a private owner in 2019 and is currently undergoing renovations that have made it a wonderful home again.

The Mason-Allen House was built around 1871 by ship captain Josef Mason.  The 1920 Santa Rosa Census states Capt. Mason was born in Austria with German listed as his native tongue.  The Census lists Mason having immigrated to America in 1858, and been naturalized as an American citizen in 1865.  Capt. Mason’s family lived in the house until 1994 when the property sold to Santa Rosa County.

Starting in 2004, the Blackwater River Foundation sought funding to relocate the house from the historic district in Milton to neighboring Bagdad.  When Santa Rosa County Commissioners decided in 2006 the Santa Rosa Courthouse would be relocated from downtown and the house was no longer in the way of future expansion projects, the foundation entered into a partnership with Main Street Milton and Santa Rosa County to save the house in its original location to serve as the Milton Heritage Center. The house at that time was in a very serious condition of disrepair.  In April 2007, the Help Thy Neighbor Volunteer Center (a program of RSVP) facilitated a team of volunteers from Clearwire Wireless Corp. to paint the house and build shutters to protect the building until it could be restored. 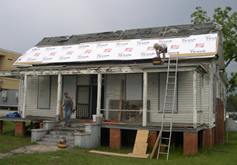 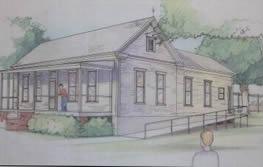 The Foundation’s proposal was to serve as offices for nonprofit organizations and the Santa Rosa County Veterans Memorial, a site for the downtown farmers’ market, and as a festival area.  The Foundation acquired conceptual renderings of what the Heritage Center might look like once completed, secured funding to begin the project, and gathered volunteers to start restoring the house.  However, very unfortunately, for reasons beyond the Foundation’s control, the Foundation was informed the house had to be relocated after all.  As a result, an individual purchased the house from Santa Rosa County and relocated it to neighboring Bagdad with hopes of restoring its to its former glory to serve a public purpose. However, in 2017, the house was dismantled for salvage.

The Mason-Allen House Project was partially funded by materials donated by The Home Depot Foundation, funds from the Blackwater River Foundation, technical assistance by the Florida Division of Historical Resources, and volunteers from Clearwire Wireless Corp., the Help They Neighbors Volunteer Center (RSVP), and Main Street Milton.

In 2008, the Foundation provided financial and organizational assistance to Mount Bethel Baptist Church in order to obtain architectural renderings for the reconstruction of a steeple that was removed in the 1970s from its circa-1910 church building in Bagdad.   The building is empty and unused at this time, but with the architectural renderings of the church, the Foundation hopes to apply for historic preservation grants to rebuild the steeple to resemble its historical appearance and provide the church an opportunity to open the building for public use.